ANDY T weary of the flesh 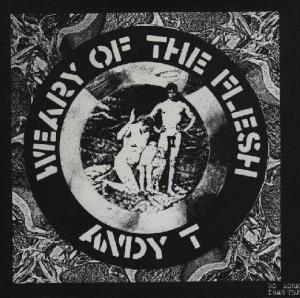 Released 20/11/82 the  single was in the alternative charts for 4 weeks and highest position was 24. Home recorded at the Crass bunker and remixed at Southern Studios.

Interview for Ian Glasper ‘The day the country died’ unedited
Category: Writing and Poetry
‘how did you come to the attention of Crass Records? what can you recall about the recording of the single (was it done at Dial House? how much input did Penny have? etc.), and how do you regard that release now, with the benefit of hindsight?’

I cannot remember where I first met Crass exactly.  I think it was thorough my friendship with the Poison Girls who lived just down the road from Crass.  I found we had very similar ideas and Penny, Gee and Steve have been lifelong friends and are very dear to me. Sometimes people said they felt intimidated in their presence although I never felt this. We always had lots of fun. They pioneered the playing in very ‘out of the way’ places, not on the usual rock ‘n’ roll circuits. We went places bands didn’t normally play and always met enthusiastic audiences. Crass chose five tracks from a pile of tapes I sent them for Bullshit Detector. They asked for art work of a certain size so I crammed the info for all five tracks into that sized space but when the sleeve was printed they had blown the writing up large.  I didn’t realise that I had five such spaces to fill up, a bit of a missed opportunity. I used to record loads of poems/songs in my bedroom. The ‘Fuck the CIA’ track was me and my younger brother Jerry.  When Crass chose the track for the album I had to think of a name and chose it from an old 1960’s poster.  I used to use anything that came to hand to make a sound or a point. Penny wanted me to do a single on the label, as he wanted to record me for posterity. The recording took place during another nice weekend up at Dial House. My friend Ian made some noises with his mouth and we had loads of fun doing the backing tracks. Then mixing at Southern Studios in Wood Green.  I thought it came out well.  We aimed to cram as much as possible into those grooves and I think we filled about 15 minutes, quite good for a 7 inch single. I don’t even have a copy of that these days. I had to borrow one off a dear friend to put into an exhibition recently. The inside cover photo was from another fun session involving Phil Free, Annie Anxiety and Steve Ignorant wearing animal masks. They were photographed in one of the garden sheds and we utilised a lot of printing ink – not blood! I was quite proud of the finished article and wanted to give John Peel a copy to play on his show. Rather than post it I chose to wait for hours outside the BBC to give it him in person. I’d been listening to his radio programmes since the early 70’s and he’d introduced me to a lot of good music. I told him a little bit about it and he seemed interested. Unfortunately he never played it on his show. A friend of mine asked him about it at one of his University gigs in Suffolk a few years later; John said he thought it was a bit too extreme for his show. That made me very proud indeed, to be thought too extreme for John Peel’s listeners. think it still stands up these days and it’s still an unusual approach in today’s climate where anything is possible and sometimes easier to achieve.
Lots of people used tracks from live recordings on compilation tapes and albums. My favourite was a double album from Holland which also featured tracks by Salvador Dali and Wild Man Fisher, exalted company indeed. We did intend to record an album for the Corpus Christi label.  I had quite a few things written and several ideas for backing, from various musicians etc.  Also I had some things I had written for Nico, from the Velvet Underground, to sing.  She was a friend and liked my stuff.  It would have been interesting to have taken that further.  We recorded some live shows for possible inclusion on an album too.

This entry was posted in Andy T. Bookmark the permalink.