The final album released under the moniker Crass was Acts Of Love, in 1985.Although attributed to Crass, it would be more accurate to see it as a Penny Rimbaud record with contributions from other Crass people. It consisted of fifty short poems set to quirky discordant music that owed more – much more – to free jazz than punk rock.

Penny Rimbaud:“I remember when we were recording Acts Of Love – Andy coming into the studio and saying he’d like to do something like that himself, meaning he understood that I was trying to make a per- sonal expression within the framework of where we were. I think that was a seed for him. He was a painter before he got involved with the band, and I think that’s how he saw he might be able to express himself, which is what he’s done.”

Gee Vaucher: “For me, Acts Of Love was the starting point anyway – the poems and the original illustrations were done a long time before Crass.They were part of the inspiration, part of the source of going on to say what we did. For me, it’s a return to those roots – not going back- wards, but the source of inspiration within oneself. It’s a very natural extension of what we’ve done with Crass.

“It seemed to be going in the direction of causes.Young people would get caught up in causes and the whole barbaric nature of the cause that they were trying to confront.What we’ve tried to do is remind people of why they were putting themselves in a very dangerous position socially and personally, by making a beautiful record really.” 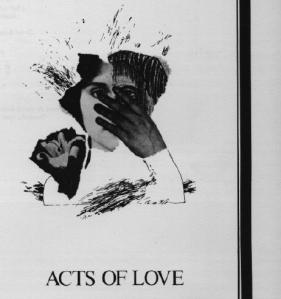 This entry was posted in Acts of Love. Bookmark the permalink.