EFFORTLESSLY DETERMINED, Kukl release an LP which trashes the ho-hum accusations of the Crass-Records-all-sound-the-same ilk. ‘The Eye’ steps boldly out of the supposed confines that the Crass label is meant to impose (confines is meant to exist only in the minds of those looking for reasons to criticise), and drags the listener into a glacial world of confused emotion and shattered visions. Side one: ‘Assassin’, highkicking and jackbooting through lengthening horns and scarred surfaces, a ‘rock’ song being slowly demolished, ending up in screams. Reminiscent ever so slightly of ‘The Scream’, primarily I suppose because of the howling vocals and decaying metal. ‘The Eye’ easily passes beyond that as there is not a hint of contrived control or predetermined melodramatic effect. ‘The Spire’ offers images of Holy Mother Church, with an atmosphere that contradicts the phrases lingering just behind: “I know the power/Pointing up/Raised fist/Exploding penis.” And in the background, there is the shadow of menace. “On the other side of a big river/Lies her own body” (‘Anna’): reminding me of ‘Steven’ from Alice Cooper’s ‘Welcome to my nightmare’ LP, all haunting vocals that breathe a hopelessness from foreign towns. It seems pointless (patronising?) to mention that they’re from Iceland, but it helps to give a pointer towards this desolate, clinging mood that informs the LP: “Dismembered/Hugging shadows/…Play with me” (‘Dismembered’). An amazing record, and a swift plug too for the incredible cover by Dada Nana, and for the label. Crass Records who refresh the minds that other labels only brainwash … TIBET 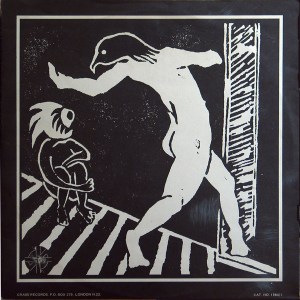 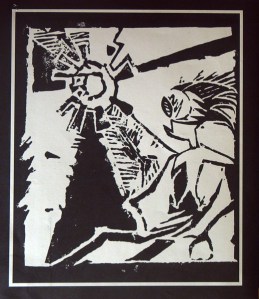 This entry was posted in Kukl. Bookmark the permalink.

One response to “KUKL the eye ”