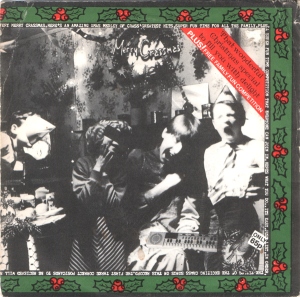 Released December 15th Christmas 1981, Creative Recording And Sound Services was cranked back into action with a comedy Christmas single: ‘Merry Crassmas’. Featuring an end of pier organ playing a medley of Crass songs, a cheery Santa voice wishes everyone a Merry Christmas at the end, adding that if they were munching on a delicious turkey as they lis- tened,“I HOPE IT FUCKING CHOKESYOU.”

Crass released their fifth single, “Merry Crassmas“. It was backed by “Merry Crassmas 2“. What a nice gift for Christmas from the punk band from Essex, England! Neither track appeared on an album. As an added Christmas bonus, the Crass medley of songs, which is what these tracks were, could be deciphered and entered into a contest to win a bonus gift from the band. The single reached the #2 spot on the U.K. indie singles chart.

This entry was posted in merry crassmas. Bookmark the permalink.