STATIONS OF THE CRASS 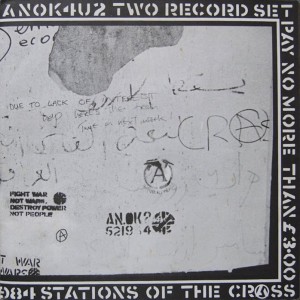 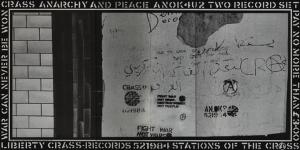 From the story of crass:- With their new found popularity in tow, Crass went into Southern Studios to record their second album.The religious parody title theme was kept from Feeding for Stations OfThe Crass.This time it was an enor- mously ambitious double album, three sides of new stuff and a live side from a gig at the Pied Bull (later to become the Powerhaus) in Islington. The product was all wrapped in the (now trademark) wraparound sleeve and sold for just £3, still less than a normal single album. Stations of The Crass is, in many ways, the most varied of their albums, not to mention the best selling. It sees the band experimenting with dif- ferent sounds, not scared to leave space in the music or try influences from different genres. Most of all, it sees them sail defiantly in the oppo- site direction from rock’n’roll.Which isn’t what Penny Rimbaud thinks: “We were being briefly, slightly a rock band.”

Penny wrote in Shibboleth ‘In the summer of ’79 we recorded our second album ‘Stations of the Crass’ which we released that winter. The title was chosen to celebrate our operations with the spray can, while the cover carried a photo of a wall at Bond Street station displaying the resulting efforts’. 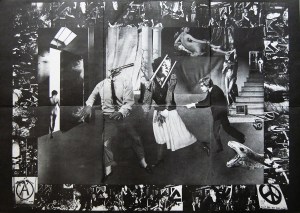 The LP came as two 12″ discs with a wrap around poster sleeve which you can see here, designed by Gee Vaucher originally it is a collage 82cm x 58cm. 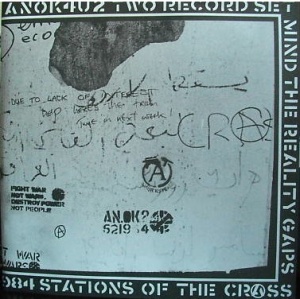 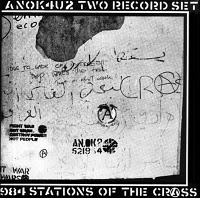 This entry was posted in Stations of the crass. Bookmark the permalink.

One response to “STATIONS OF THE CRASS”